Something interesting happened yesterday evening...something I was hoping to get some input about. Hopefully you readers will have some!

Around this time yesterday evening, I don't remember exactly what I was doing, but it was something mundane. Then, suddenly, an image of Ganesha's head forced its way into my mind. I say forced for lack of a better term; however I wasn't thinking of Ganesha at the time, or anything spiritual if I remember. But I knew this wasn't an ordinary wandering thought - I could tell because this image of Ganesha's head was present in my vision without me having to actively think of it. I could see it very clearly, and attempts to dismiss the image didn't work - I closed my eyes and opened them again, but the image persisted. It was like an image burn on my retina, sort of - you know how old cathode ray tube monitors got image burns that lingered on the monitor even after it turned off? Like that.

The image disappeared after a few seconds, but I can remember clearly what it was like. Using Google image search to try to find an approximation for you readers without having to resort to vague text, the closest resemblance I could find is located at the bottom of this blog post.

Of course, I'm not sure what this means, otherwise I wouldn't be asking my readers for input. Also, I know I sound crazy...I don't know how to prove that I had this vision to you all. But hopefully you readers trust me enough to know that I'm not making this up. 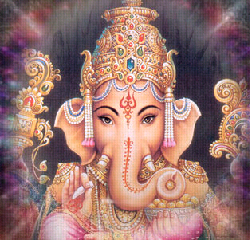 Posted by Webimpulse at 7:24 PM