Namaste readers! For those of you who have read some previous entries of my blog, you may know of some of my interests - some more obvious than others. One interest that should be blatantly obvious by now is my interest in Hinduism and its associated spirituality. Another interest that is less obvious is that of heavy metal and its subgenres in music. I've written on how I perceive the two areas of Hindu spirituality and heavy metal sometimes intersect in a couple of previous posts, both of them titled Heavy Metal/Hardcore Music as a Universal Language. (The other post is here.)

Now, I'm not trying to make heavy metal sound mystical, nor am I trying to make Hinduism somehow tied to heavy metal/hardcore music. What the point of those posts was is to demonstrate how it's possible to have a foot in both worlds without having to compromise one's own beliefs. And I've just encountered music by a band that apparently believes in the same thing: a band called My Sleeping Karma.

While I haven't done that much research into the band itself, I think I can safely assume that they have their foot on both sides of the divide as much as I do. After all, they openly claim influence from classical Eastern music, especially that of South Asia, and it shows right down to their album artwork, especially from their most recent album, Moksha: 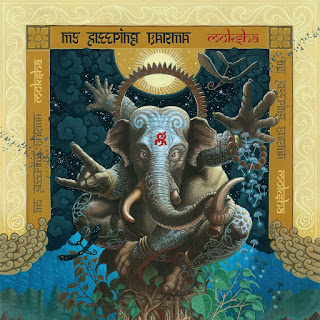 The album art here clearly depicts the Hindu god Ganesha, albeit in a form that is obviously seen through the artistic eyes of the band. On the left side of the album cover, you can see Ganesha holding up the "horns" that have become a universal hand gesture among heavy metal enthusiasts. Interestingly enough, that hand gesture is similar, but not identical to, a mudra in Hinduism, that is, a hand gesture with spiritual significance. More specifically, it shares its resemblance to the apana mudra, as pictured below. Again, they are not the same, but I'm pointing out the similarity to prove my point.

So far, so good, so what? The ideas that My Sleeping Karma explore - that of using South Asian classical influences in their music and artwork - is nothing new. After all, Tool have been doing it for decades. But there's one key difference I think will shut down MSK's critics on this point - Tool haven't released an album for almost 9 years. MSK have certainly been more prolific than that, having released a total of five albums (including Moksha) in less of a time period than Tool have been around. Man cannot live on Tool alone, so MSK can fill the void.

How so? While MSK have inevitable similarities to Tool, there are some key differences that prevent them from being just another soundalike. For one, there are no lyrics. While the vocals of Maynard James Keenan certainly lend the music of Tool some of its uniqueness, the absence of lyrics from MSK's music can actually give the music itself more importance, and more focus. Also, MSK's exploration of the themes of Hindu spirituality are far more prominent than that of Tool. For instance, all the track titles on Moksha (save for the interludes) are titled with words from Sanskrit (for instance, the title track "Moksha" is Sanskrit for liberation, at least in the spiritual sense of liberation from the cycle of birth and death). MSK is also more consistent with their influence from South Asia, at least with the album Moksha, than Tool have been - where Tool's influences are scattered all over the place, borrowing (and sometimes appropriating) from any culture that has a perceived "mystical" element to it, MSK sticks more to this one influence, so in a sense it pays the traditional spirituality of South Asia more respect and gives a more grateful homage to it than Tool have done.

All this being said, the South Asian influence comes into play more on Moksha in the key notes and beat structures than actual instrumentation. There are only rare instances of actual South Asian instrumentation being used on the album, and they're confined mostly to the interludes between tracks. However, there's still enough sound experimentation on Moksha to give the listener an otherworldly impression, and it's got more substance to think about than many heavy metal songs with lyrics. Pretty much the only straightforward instrumental rock piece on Moksha is the closing track "Agni." All this comes across, once again, as paying homage to their influences rather than being so dependent on them that it would be seen as appropriation. One needs to toe a fine line as an artist when attempting to borrow influence from another culture that it doesn't seem like you're disrespecting it by overtly stealing from it, and that's a line MSK have seemingly mastered to balance upon like a tightrope.

I would highly recommend Moksha if you're a Tool fanatic who's about ready to do something stupid in the absence of new Tool music. MSK's music can not only fill the void, but also give you new sonic elements to ponder and be stimulated by. Moksha adds to the proof that heavy music doesn't have to be simple and/or stupid to be enjoyable. My Sleeping Karma are most certainly not the first pioneers into this intelligent territory. But they're pioneers worth your time and attention.
Posted by Webimpulse at 11:19 PM