Namaste readers - you might remember this time around a year ago I made a post concerning the Hindu holiday Nag Panchami. Well, more specifically, it was about a dream I had that seemed influenced by it...more specifically a dream where a king cobra snake wanted to be my best friend, just about. In the intervening time between then and now, obviously no snakes became my friends. Yet I still think about this holiday, and cobras in general, from time to time.

I had the silly idea of posting about this dream on Yahoo Answers, and as one might expect, I got trolled pretty badly. But one answer seemed legitimate and made sense - since the snake in that dream wanted to be my friend, and snakes feature pretty prominently in Hindu iconography, this person speculated that perhaps it meant that I should fully embrace Hinduism, and that not only had I nothing to fear from it, but that I would benefit immensely from it.

I would say this to be spot on. My faith may have waxed and waned from time to time, as anyone's faith is prone to do, but in both the real and spiritual sense I have had nothing but good results from my embrace of the Hindu faith and culture. Right now my only wish is to go deeper, further immerse myself.

So to the king cobra in that dream, I say thank you...and to those readers who observe it, thank you as well, and have a blessed Nag Panchami this year. 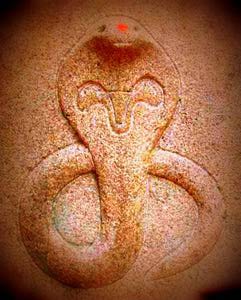 Posted by Webimpulse at 7:12 PM