Some of you have probably seen this before, but I want to share it regardless: 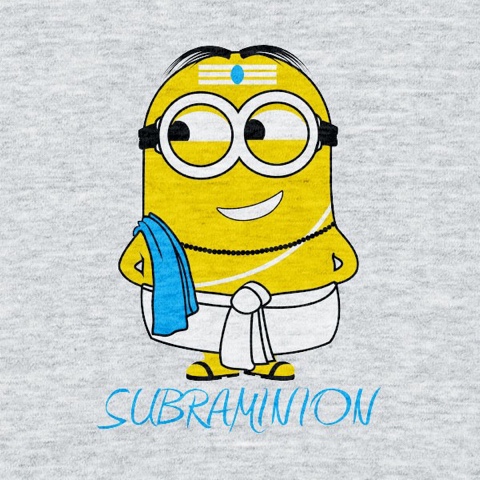 I didn't make this image, obviously. But it still strikes me in a good way. I mean, it's yet another collision between Western pop culture (in this case the Despicable Me movies) and Hindu tradition (more specifically the South Indian deva/deity Subramanyam...I hope I spelled that right). I've seen several of my Indian friends share this on Facebook.
There are still sometimes I still wish I was born Indian (or any other skin color for that matter). But I've come to realize that if I'm unhappy with the skin color I was born into in the first place, odds are being born a different skin color wouldn't have changed anything for me. The self is the self, and while you can change yourself, you have to be the one to do it. So there's no point to lament the body or mind you were born with. Change won't come that way. Self-confidence is the key to changing yourself for the better.
It is through self-confidence that I know I'm a Minion of Ganesha by now. ;)
Posted by Webimpulse at 3:08 AM No comments:

A Hidden Test of Strength

I'm typing this blog entry calmer than I was a few moments ago. Let's just say something...major happened. I don't want to disclose too much of what happened, but it was a home security issue and police were involved.

The reason why I'm writing about it now is because I managed to emerge through it all not only unscathed physically, but also unscathed emotionally. I was shaken up, for sure - what happened in my apartment would shake up any sane human being - but...I felt in control. In other words, I didn't get distraught, inconsolable, or even panic.

If this had happened even a few months back, this wouldn't be the case. But through faith in Shri Ganesha, and applying what I learned over the years from the Art of Living and a life coach that I've been seeing, I managed to calm myself and stay calm. I think I have concrete proof that Shri Ganesha is watching over me, because the potential for this ending far worse was almost limitless.

Maybe that's the reason why I feel so Zen right now after the fact. Something might have gotten stolen, or I could have been hurt, or worse. But none of those happened. Not only that, but I have proof that my own emotions can be mastered.

Obviously what happened wasn't anything good...but I feel good having gotten through it. It was a test, and I apparently passed.